Earlier today I bought an adorable faux black Chanel iPhone case. It was a little pricey, but still worth it. I also snagged a new MacBook Air case from Future Shop, buuut sadly it barely fits the 13” model that I have. I’m tempted to take it back, only because of how difficult it is to pull the laptop out once it’s in the stupid case… it’s just…I like the style too much. I even got my Mom to sew a brown & gold-colored button on the front tab. ♥

I also updated my MacBook Air to the latest OS X, Maverick. It apparently comes with all sorts of new apps like Maps, iBooks, etc. The app that allows you to create iBooks is particularly beautiful. I don’t know what I will write, but I’m inspired to write something. The tags feature looks pretty sharp, and offers an impressive way of organizing every file on your computer. I can’t wait to start playing around with that. (Woo tag everything!)

And for my ultimate favorite feature ever to come in an update… MULTIPLE DISPLAYS! I can now wirelessly connect my Mac to the Apple TV, which means no more mess of HDMI cords all over hell. Using your TV as a display is super, super fun.

My second ultimate favourite feature is Finder Tabs. Not exactly ground-breaking, more like a necessity that should have been a part of Finder from the start. You can open one window in Finder, and instead of opening a bunch more (yikes, clutter), now it’s a simple as opening a new tab like in Safari.

This laptop can do anything, and is a complete joy to work with. Totally in love with it. Sure,  I can’t update any of the hardware, which really sucks, and all the “stuff” Apple gives you from the App Store takes up 60+GB which is half of my HD… Still. It is awesome for what it is.

On August 29th, 2011, the Daily Post challenge was to write a movie review.

Here in North America, the highest grossing movie in history is Avatar. In Japan, a different kind of movie took the spotlight, and that’s Spirited Away. 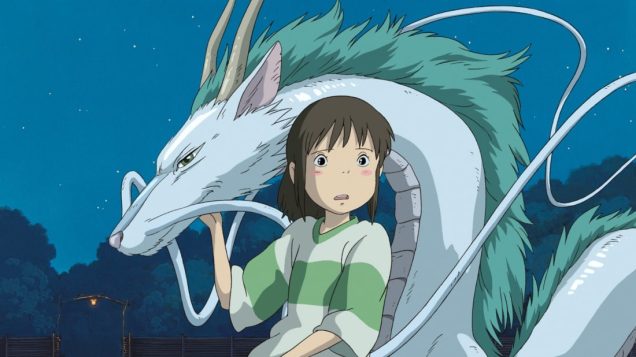 Few people can say they’ve never heard of Spirited Away. When it was first released in 2001, it received huge praise from critics worldwide. According to Wikipedia,

“Rotten Tomatoes reports that 97% of critics have given the film a positive review, based on 155 reviews, certifying it “Fresh”, with an average rating of 8.5/10, and ranks as the thirteenth-best animated film on the site. In 2005, Spirited away was ranked the twelfth-best animated film of all time by IGN. The film is also ranked #9 of the highest-rated movies of all time on Metacritic; being the highest rated traditionally animated film on the site. The film ranked #10 in Empire magazine‘s “The 100 Best Films Of World Cinema” in 2010.“

All this praise is not empty. With 100% certainty, I can say Spirited Away is one of the best animated films of all time, alongside Princess Mononoke. The renowned Hayao Miyazaki directed both films.

Spirited Away starts off with a girl named Chihiro, and her family, who are moving to the suburbs. Chihiro’s father winds up lost while taking a shortcut to their new home, and they come to an abrupt stop in front of a long tunnel. Deciding to explore the area, Chihiro’s parents (whilst dragging along a sulky Chihiro), somehow end up crossing over to the spirit world. Their own greed turns them both into pigs, and now Chihiro is left to to weave the dangers of the spirit world, turn her parents back, and get them all home. Pretty daunting task for an ten-year-old.

One thing I love about this movie is how carefully Chihiro matures throughout it. At the beginning, we find a sulky, whiny little girl with no sense of adventure or independence. As time progresses and she matures, we watch her become someone who is independent and selfless.

Another thing is the soundtrack. Varied and beautiful to the extreme, especially the piano scores. The hours and dedication put into each piece shows.

Most of the scenes were hand-drawn, which is an amazing feat when you think about how long the movie is. The animation is smooth, colorful, flawless, and really is one of the things that makes this movie stand out any other animated feature.

The story line itself is enough to place this at the top. Deep and satisfying, this story doesn’t disappoint. You can feel the attention put into making the best story possible here. Hayao Miyazaki’s movies never feature the simple “good” vs. “evil” plots we often see, but explore the concept of an antagonist with many sides. We find in this movie that no person is simply “evil”, people simply have different motivations and beliefs. The result is that every character is well-rounded and complex. It’s hard to go back to movies with simpler plots after watching masterpieces like this.

Overall, Spirited Away is a brilliant movie, one that anyone will love. Even if you don’t usually watch animated movies, you’ll find it difficult not to appreciate this one’s charm. Give it a watch.